The Beast In Me

“The beast in me is caged by frail and fragile bars. Restless by day and by night rants and rages at the stars. God help the beast in me.” ~Nick Lowe~

When I first heard the opening strains of The Beast In Me I stopped cold, listened closely, swallowed hard, and replayed it. I was alone, which was good because the song sliced me to the marrow.  It’s the third cut on Johnny Cash’s 1994 American Recordings, and in what may be a quirky coincidence was penned by Nick Lowe, a former son-in-law of the Man In Black.

The stark guitar notes caught me—the commanding yet subdued voice delivered barbwire lyrics that tangled around my heart. I wanted to find somewhere to hide—the room was closing in around me as free association imaginings swirled madly through my brain.

The words weren’t covering any new terrain—I’d frequently traversed that landscape. I was fully aware of the ugly brute that resided in the caverns of my soul, and ever mindful of the nest of snaky contradictions squirming around the edges of best intentions.

However, to have Big John Cash drag all that repulsive crud out into the open to fill the empty spaces was more than a bit unsettling. I was undone and sincerely desired an exit strategy, but my thumb seemingly had a mind of its own—it kept striking the button so that the song was played repeatedly.

What slashed at me again and again was the unrelenting, unforgiving, unrepentant honesty of the images. It was as though the songwriter had crawled up inside me, took a long survey of the dark crevices, made copious notes, then transformed his observations into a poem set to a bare bones melody.

“The beast in me has had to learn to live with pain and how to shelter from the rain. And in the twinkling of an eye might have to be restrained. God help the beast in me.” ~Nick Lowe~

I was a newly minted reverend at the time, but shouldered scars that’d make sure I’d never fit the cookie cutter mold. I’d been gifted and trained to be a shepherd, and possessed a determined desire to faithfully fulfill the call, yet invariably felt out of place. 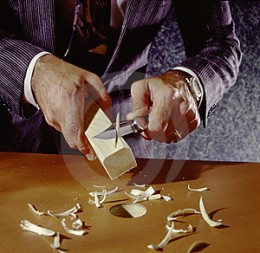 Rough-edged and without an ounce of nuance, I was a splintered peg in a smoothed down environment that often exasperatingly paid homage to the nabobs of political correctness. It didn’t take long for me to realize that for many dedicated pew-sitters there was this impossible expectation that I had all the appropriate answers, when in actuality, I didn’t even understand most of the questions—still don’t as a matter of fact.

I hadn’t attended the right schools or jumped through the customary hoops. My learning was picked up in craggy ravines and deep ditches. Pain—both physical and emotional—was a weathered partner who oft-times provided me with a surreal comprehension of human fragility.

When it came to Scripture, being practical dominated my perspective. It always had to be about how the precepts played out in my life. The theoretical was good fodder for debate or discussion, but how the ancient words were to be applied to my actions and attitudes motivated me.

Due to the circumstances of the road I’d traveled, sin and redemption were not abstract concepts—I was fully acquainted with the unadorned certainty of them. I knew the man in the mirror—more importantly I had a serious knowledge of the sin nature woven into the fabric of my soul. As the music overloaded my senses, the beast in me attempted to squirm into the shadows with all the slothful dignity of a grotesque snail leaving a trail of slime. I cringed, while reaching for a copy of God’s Word.

Not for the first or last time, I turned to a letter inspired by the Creator of the universe and put onto parchment by a tentmaker and itinerant preacher from Tarsus, a city in southern Turkey. The book of Romans, Paul’s profoundly complex theological opus is a gold mine bonanza with an abundance of brilliant gems. Consider the following passage—even presented in the modern language of Eugene Peterson’s paraphrase, it strikes with the weight and precision of a double-edged sword.

I can anticipate the response that is coming: “I know that all God’s commands are spiritual, but I’m not. Isn’t this also your experience?” Yes. I’m full of myself—after all, I’ve spent a long time in sin’s prison. What I don’t understand about myself is that I decide one way, but then I act another, doing things I absolutely despise. So if I can’t be trusted to figure out what is best for myself and then do it, it becomes obvious that God’s command is necessary.

But I need something more! For if I know the law but still can’t keep it, and if the power of sin within me keeps sabotaging my best intentions, I obviously need help! I realize that I don’t have what it takes. I can will it, but I can’t do it. I decide to do good, but I don’t really do it; I decide not to do bad, but then I do it anyway. My decisions, such as they are, don’t result in actions. Something has gone wrong deep within me and gets the better of me every time.

It happens so regularly that it’s predictable. The moment I decide to do good, sin is there to trip me up. I truly delight in God’s commands, but it’s pretty obvious that not all of me joins in that delight. Parts of me covertly rebel, and just when I least expect it, they take charge.

I’ve tried everything and nothing helps. I’m at the end of my rope. Is there no one who can do anything for me? Isn’t that the real question?

The answer, thank God, is that Jesus Christ can and does. He acted to set things right in this life of contradictions where I want to serve God with all my heart and mind, but am pulled by the influence of sin to do something totally different.

Thanks Be To God
“Sometimes it tries to kid me that it’s just a teddy bear. And even somehow manage to vanish in the air and that is when I must beware of the beast in me that everybody knows. They’ve seen him out dressed in my clothes, patently unclear if it’s New York or New Year. God help the beast in me.” ~Nick Lowe~

Therein lays the human dilemma. Our sin nature is a beast within that is always lurking. To deal with it requires an ever-increasing vigilance to guard against complacency. What Nick Lowe wrote and Johnny Cash had the integrity to give voice to with uncompromising experiential authority, is the raw reality of being human. The beast takes on unique characteristics for each of us based upon genetics and upbringing—it’s an impulse that’s deeply rooted.

We can wish it were not so, but that means dwelling in fantasyland—we may recognize the beast in others while denying it in us, but that’s akin to bundling up in a cloak of denial.

The truth is this: We are guilty of both kneejerk manifestations of sin and also those measured moments of disobedience. We endeavor to keep the beast caged on a short leash, but there are those self-absorbed instants when we allow it to run free. In this we are no different than King David of Israel. Here was a man whose writings reveal a heart nearly obsessed with honoring his Maker, yet in the midst of a tremendous treatise about the marvel and majesty of God’s Word, he made an unvarnished confession: “Though I constantly take my life in my hands, I will not forget your law.”

I constantly take my life in my hands. WOW. How often do we do exactly the same, yet refuse to admit or acknowledge it?

Our aspiration is to walk in obedient faith, yet our failings are prevalent. To suggest otherwise is to have swallowed the grand deception of pride, which by the way, some regard as the original sin.

The previous excerpt from Romans seven quite effectively identifies the problem of sin and its influential impact on us, but it also proclaims the solution—Jesus Christ. “What a wretched man I am! Who will rescue me from this body that is subject to death? Thanks be to God, who delivers me through Jesus Christ our Lord!” Expanding upon that astounding hope, the opening phrase of the next chapter is endlessly fascinating—the NIV reads: “Therefore, there is now no condemnation for those who are in Christ Jesus, because through Christ Jesus the law of the Spirit who gives life has set you free from the law of sin and death.”

To be in Christ Jesus means to be empowered by God to put the boots to our sin nature. The song, The Beast In Me, is a reminder of my desperate need to abide in Christ Jesus, because quite frankly, the process of years and grace hasn’t diminished the capacity for the beast in me to fiercely mark its territory.

The potential for the beast in me to generate troubles remains real, but that’s no reason to cry, whine, or be dismayed. Instead there’s joy in the mysterious wonder of the supernatural at work in my soul—thanks be to God, who delivers me through Jesus Christ our Lord.