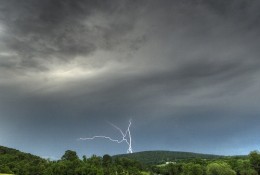 The clouds tumbled across a gray twilight sky. Circles of wind were turning leaves inside out. Trees bent in submission to a higher power.

The air was cool and easy, with a hint of freshness beneath the strong scent of a storm. Off in the distance little flashes of lightning flittered about like mythic nymphs dancing—or perhaps it was the wings of angels fluttering. Rain was coming, riding in on a well-worn trail. I sat on the porch of the cabin watching and waiting. The temperature had taken a drastic nosedive, transforming a scorcher into a pleasant evening.

The sky darkened. I filled my lungs with the gathering gloom. It was good to be alone in the mountains with no one tugging at me. The sociopaths hell-bent on conforming to the dictates of propriety could scramble up the success ladder without me, thank you very much.

It had been an awesome independence proclamation. I’d unleashed the black dogs and let them howl in menacing glee as tongues of flames consumed the shadows of the jokerman I’d become. The shock had put some into a stuttering state of finger-pointing condemnation.

Somewhere far behind me an ash heap of expectations still smoldered. Harlequin mockers gossiped merrily as fragments of my flesh were roasted over the coals. Tiny pieces of me carved up and cooked by those small-minded enough to snap to attention and salute smartly whenever the stout guardians of political correctness bellowed a command.

The air was getting wet and heavy, almost misty. Overhead lightning flickered and thunder crackled as though boulders were being slammed up against great slivers of flint. The heavenly fireworks comforted me.

I pushed back and forth in the rocker. It was so stinking peaceful to do so—that simple motion of slowly rocking stirred something marvelously tranquil in the nether regions of my soul. I ran through a mental checklist—there was nothing left to do, no t needed to be crossed, no i required a dot. Those days were gone—there’d be no more jumping through hoops for the man. I was free—if being free meant having no place to go and no one anticipating your presence, then I was free indeed.

The rain arrived in a sudden sweeping burst. It came in on a slant—a sheet of great big gobs that struck me sideways. I rose out of the rocking chair, walked off the porch and stood in the drenching downpour. I am a child . . . I am a man . . . I am perpetually betwixt and between. I am a dreamer who frolics on a hillside and laughs in the face of the ancient jester and thief. With arms outstretched and eyes straining upward, a song sprang from my lips. I turned a pirouette and was released as the windswept thunderstorm of glorious beauty and wonder washed over me.

It was a breathtaking baptism, and in that mystic cleansing moment I escaped. The race that changes individuals into snaggle-toothed rats tread-milling along would be for others, not me. The essence of who I am floated into the ether of unconsciousness. I drifted along on an easy jet stream until sweet freedom swaddled me in its soothing warmth.

All of the above happened only inside my brain.

The Way I Am
“The way I am, don’t fit my shackles. The way I am, reality. I can almost see that bobber dancing. So I just dream, keep on being the way I am.” ~Sonny Throckmorton~

Reality for me is radically different than that fanciful daydream, though obviously, elements of it have deep roots within me. In this I doubt that I’m alone—it is universal that, more often than not, the human condition means being connected to an unending chain of responsibility.

The song The Way I Am expresses well the sheer tension of living. Sonny Throckmorton wrote the words, but it was Merle Haggard who gave them a voice that struck me with all the subtlety of a rapier slashing away at the façade of the man I had become. Upon first hearing it, I understood that on multiple levels, the song spoke directly into my life. It was the early eighties. A swirling cesspool of misdirected emotions was seeping out of me—its stench poisoned my perspective and pushed those who loved me away. To say I’d thoroughly messed up would be an understatement of grand dimensions.

The hag of February was brewing a cauldron of nasty weather outside. A blizzard had been blowing itself into an outrageous rant, so I was secure inside drowning misery. Minding my own business, I was drinking beer and chain-smoking at an old scarred table of a roadhouse on the outskirts of a steel city in northern Ontario.

A jukebox in the corner was being fed quarters by a pair of wannabe cowgirls on the prowl. Their tight-fitting jeans sent much of the mystery down the drain. I’d like to tell you I paid no attention to the swaying curves of their backsides, but that’d be a flat-out lie. They waltzed past, and yes indeed, I had a good look.

The strains of The Way I Am caught me, then the opening phrase delivered in Haggard’s mellow whiskey voice took me away: “Wish I were down on some blue bayou . . .”

I sat still and listened to every word, staring at the jukebox as though it was actually the artist performing. The imagery dragged me inside it. At the time I had a job I despised with a visceral hatred—I was also haunted by ghosts rambling around black-hearted closets of memory. There was, however, an even more significant factor as to why The Way I Am captured me completely. A creative voice was trapped within, dying little by little, bit by bit—it desperately did not want to be silenced or worse, executed.

A short while after that snowy afternoon in the barroom, the writer would claw his way out. It was a spasm of grace that cut him loose.

A Clamoring Hunger
Over the ensuring years and miles, The Way I Am became the fodder for many philosophical meanderings centered on the questions: Why am I the way I am? Why does a roughhewn man with bluecollar sensibilities and a butcher block body have a poet whispering in his soul?

People may regard me as a slightly crazed dreamer wasting my life gazing off into space. Or perhaps the judgment is harsher—maybe I’m viewed as obsessively, compulsively insane. Either assessment is just fine and dandy, for one does not labor at the craft of writing in virtual obscurity for a quarter century without developing a thick skin and a snappy comeback or two. In the immortal brush-off of my maternal grandfather, those scoffers can go pound salt for all I care.

I write because I’m a writer—it’s the way I am. There was no choice in the matter—I didn’t have a say in how the Creator wired me. I do not write for fame or riches, but simply to string words together in ways that satisfies a yearning, clamoring hunger.

Beyond that, if one demands a broader explanation, then they’ll never know or comprehend the compulsion—they’ll never experience the overwhelming joy of exploring an interior landscape littered with plotlines and characters in every shadowy nook and cranny. For me it’s an everyday story. The shackles don’t fit—they’ve never fit, nor shall they ever. So I write and keep on writing the way I am.

3 Responses to Shackles: An Everyday Story