In the late 1930s in Wainfleet, Ontario, God was stirring in the hearts of several different people. The Great Depression was lingering, so economic hardships were common, but spiritual resources were plentiful. The kernel of a Big Idea was germinating in George A. Sider’s mind. He was a man of enormous faith and vision whose lifelong motto was: “Little is much when God is in it.” At the time, he was a deacon in the Wainfleet BIC congregation, and his Big Idea was to start a Sunday school in Reebs Bay, a little lakeside community twelve or so miles away. BIC is affectionate shorthand for Brethren in Christ, one of the best kept secrets in North America.

One Saturday morning at the farmer’s market in Dunnville, he mentioned the idea to Mrs. Grant Fretz, who was thrilled to hear it because she had been praying for a work to be started. She and her husband had moved their young family to that area in April 1932. She had an overwhelming burden for all the children in the small but growing neighborhood.

God had laid it heavy on her heart to pray that those children would hear the gospel message and learn about Jesus. She was sensitive to the Holy Spirit and responded in obedient faith, believing that God was “able to do immeasurably more than all we ask or imagine.” From the outset, prayer was an essential ingredient of the effort.

Hard Work
George and his wife Mabel gathered a group of hard pray-ers and hard workers from the Wainfleet congregation. They may not have referred to it as such, but a partnership was

created. In the winter and spring of 1939, they began spending time in the Reebs Bay neighborhood, knocking on doors and visiting homes and inviting everyone to the launch of the Sunbeam Sunday School. It was an exhausting time of excitement and adventure. There was no particular pattern or model to guide them along, and they really didn’t have any special training. They were just ordinary individuals who loved Jesus and loved people.

To get an appreciation of their level of commitment, try to imagine every Lord’s Day beginning before sun-up and coming to a close long after sunset. George and his start-up team would spend each Sunday morning at Wainfleet, with many of them engaged in leadership or teaching roles.

Then they would pile into rickety vehicles for the trip over bumpy roads, often stopping for a picnic and some family time along the way. After lunch, they would spend several hours in friendship evangelism endeavors in the Reebs Bay community, then head back to Wainfleet for the evening service. When they finally arrived at home, there would be chores or clean-up duties demanding their attention.

Sunbeam Sunday School
All the prayers and hard work came to fruition on April 8, 1939. 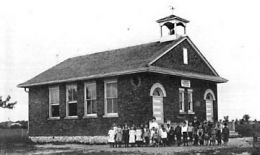 On that springtime Sunday afternoon, the inaugural service took place in a one-room schoolhouse on the corner of Highway #3 and Quarry Road.

A near-capacity crowd of interested seekers participated in a celebration of choruses and gospel songs, followed by a Bible lesson geared toward the youngsters. The success of that first event galvanized the partnership and allowed them to dream big dreams. Services continued every Sunday afternoon, with the core group from the Wainfleet congregation maintaining their

After songs, prayer and teaching, there would be fellowship, then the workers had to make sure everything was back in order for classes the next day. For them, there were no paychecks collected or honorariums passed out. These were people who toiled all week long on their farms or in secular jobs to support and care for their families; these were profoundly decent people who completely sold-out to the notion of seeking God’s Kingdom first and foremost.

Little Is Much When God Is In It
All through the war years they depended on the leading of the Holy Spirit. Even when strict rubber and gasoline rationing caused great sacrifices, they were not deterred; even when the workers outnumbered those who attended, they pressed on.

There were more than a few low points, when from a human perspective the tiny numbers being reached could not be justified by the expense incurred or logistics entailed.

By today’s high-speed growth standards, the plug would have been pulled. Indeed, more than once there were those who recommended that the struggling venture be terminated. Many prayers were prayed and many tears shed. The leadership remained steadfast in its perseverance because “Little is much when God is in it.” 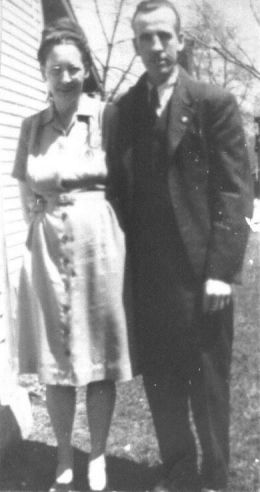 Shortly after World War II, Percy and Geraldine Major moved to Reebs Bay. It wasn’t long before they were invited to the Sunbeam Sunday School. They began making the half-mile walk to the schoolhouse on Sunday afternoons. Seeds were being planted in their hearts and in the hearts of their children. God was at work. At a tent revival meeting held across the road from the school and led by E. J. Swalm, Percy and Geraldine felt an intense urgency swell within their hearts to “get right with God.”

They had a powerful spiritual encounter that rejuvenated a faith that had grown dull and dead. It was a transformational experience.

I tell you all this because Percy and Geraldine Major were my grandparents. I was born in 1955. My mother carried me to the Sunbeam Sunday School where my name was placed on the Cradle Roll. At some point, I was given a little wooden plaque that is in my office today. It has a robin on it along with the words: “THE LORD GOD WILL HELP ME.” In times of sadness or difficulty I have often read those words through a veil of tears.

In 1956 a building program was undertaken on a parcel of land a stone’s throw away from the schoolhouse, then in 1957 the Sunbeam Sunday School moved into its own facility and became the Port Colborne Brethren in Christ Church.

My grandparents were among the handful of charter members. It was at that gray-stone building where I learned about Jesus. It was there that my name was recorded in the Lamb’s Book of Life when I received him as my Lord and Savior; it was there that God called me into ministry. Would my family have learned about Jesus without the Sunbeam Sunday School? Would we have ever heard of the BIC?

I do not know the answer to either of those questions, but given my present perspective on eternity, I am extremely grateful to those devoted people of faith, vision and prayer who fashioned a partnership to plant a church to serve an obscure community nestled along the Lake Erie shoreline.

Five generations of my family have been impacted for Christ because George A. Sider had a Big Idea, then possessed the spiritual fortitude to follow through on it. And God chose to bless the prayers and hard work.

Outward Focused
Is church planting necessary in the 21st century? More than necessary, it is an essential manifestation of discipleship; it is where the abstract concept of obedience hits reality. Believers are commanded to live the gospel, which means we are to earnestly reach out to others with faith, hope and love.

We need all kinds of churches in all kinds of places to reach all kinds of people. The next generation is always approaching fast, so the body of Christ must always be involved in church planting because: (1) God is glorified. (2) Individuals encounter Jesus Christ as Lord and Savior. (3) It is who we are and what we do.

From the beginning the concepts of teamwork and missionary zeal were encoded into the DNA of Christianity. Read through the book of Acts afresh and anew to be reminded of that truth. Touching others with the good news of Christ has fueled the existence and extension of Christianity. The Church has labored to be trustworthy stewards of God’s Word while remaining culturally relevant. Keeping pace with the rapidly disintegrating culture has always been a healthy stress on our deepest values.

Sometimes we met the test head-on, while other times we retreated into ostrich mode until conviction caused us to begrudgingly adapt and formulate new ways to make connection points with the world around us. The voice of vision has always been strong in Christianity. Brothers and sisters who find it necessary to stretch and fine-tune our understanding of what it means to be outward-focused have continually blessed us.

Practice What We Preach
The Church can dance all around theological vagaries, but if we are serious about being Christ-followers, we must strive for authenticity. There needs to be a constant effort to narrow the gap between what we say we believe and how those beliefs are applied in the nitty-gritty of life. Mark Twain put it well: “Most people are bothered by those Scripture passages which they cannot understand. But for me, the passages in Scripture which trouble me most are those which I do understand.”

Of all the challenges Jesus of Nazareth presented, these three quotes are the most haunting because of their comprehensive nature. I have chosen to use the phrasing of the New Living Translation:

“All those who love me will do what I say. My Father will love them, and we will come to them and live with them. Anyone who doesn’t love me will not do what I say. And remember, my words are not my own. This message is from the Father who sent me.”

“You must love the Lord your God with all your heart, all your soul, and all your mind. This is the first and greatest commandment. A second is equally important: ‘Love your neighbor as yourself.’ All the other commandments and all the demands of the prophets are based on these two commandments.”

“I have been given complete authority in heaven and on earth. Therefore, go and make disciples of all the nations, baptizing them in the name of the Father and the Son and the Holy Spirit. Teach these new disciples to obey all the commands I have given you. And be sure of this: I am with you always, even to the end of the age.”

When we string these familiar excerpts together like this, it is self-evident that love and obedience cannot be separated. Denial is a powerful negative drain on our energy, but all our convoluted reasoning will never alter what we know in our bones to be true: Our love for Christ–our piety if you will–is inextricably linked to our active obedience to the Great Commandment and the Great Commission.

Relay Race
Somewhere in our spiritual ancestry, everyone has a story about people who formed partnerships to advance the kingdom; stories of people who sacrificially gave of their time, talents and finances to reach others with the gospel.

As followers of Jesus Christ, we are all merely runners in a relay race and we need to create partnerships to pass the baton along to the next generation of believers. May God grant us the will and desire to run well as we press on to continue ambitious church planting ventures.