Dietrich Bonhoeffer, February 4, 1906—April 9, 1945, was a German pastor and theologian. As a founding member of the Confessing Church, he was a vigorous opponent of the Nazi regime from its first days. He quickly became an active participant in the resistance movement.

Bonhoeffer was a man of great discernment. He could see the inherent dangers of the cult of personality centered on Adolf Hitler. To his sorrow and dismay an idolatrous worship of the Führer was sweeping across Germany.

Two days after Hitler ascended to the office of Chancellor, Bonhoeffer delivered a radio address that sounded the alarm. He warned that the charismatic leader could quite possibly become Verführer—a misleader or seducer. The broadcast was abruptly silenced when Bonhoeffer was in mid-sentence. He was an avowed pacifist, but as the evil of Nazism metastasized and became horrific beyond all comprehension, Bonhoeffer was gripped by an intense inner struggle. He became involved in a conspiracy within the German Military Intelligence Office to assassinate Adolf Hitler.

In April 1943, Bonhoeffer was arrested and imprisoned. Two years later, a sham of a trial took place at Flossenbürg concentration camp, at which there were no witnesses or written record kept. Bonhoeffer was sentenced to death, and then executed by hanging at dawn the next day, April 9, 1945. He was stripped naked, and instead of a rope, a thin wire was used for strangulation.

An eyewitness—the camp doctor—later wrote: “I saw Pastor Bonhoeffer kneeling on the floor praying fervently to God. I was most deeply moved by the way this lovable man prayed, so devout and so certain that God heard his prayer. At the place of execution, he again said a short prayer and then climbed the few steps to the gallows, brave and composed. His death ensued after a few seconds. In the almost fifty years that I worked as a doctor, I have hardly ever seen a man die so entirely submissive to the will of God.”

As a martyr, Dietrich Bonhoeffer cast a far shadow. The views expressed in his life and writings became extremely influential. His book The Cost of Discipleship is brilliant and ought to be required reading for anyone who is serious about their faith in Christ.

Here’s a bit of reality we’d all like to deny: We humans set the standards far too low. Scripture sets the bar high. We lower it to be comfortable.

Somehow in the midst of affluence, we’ve come up with the idea that if we’re Christians—if we go to church, then we’re good people, and life ought to be kind to us.

We expect joy without sorrow, gain without pain, growth without change, and grace without responsibility.

We’ve been lulled into the cheap grace syndrome where there is no accountability, no discipline, and no strength of character. When faced with hardships, difficulties or pain we throw our hands up and cry, “Woe is me…woe is me.” Too many of us want just enough grace to get by and feel good. We want to use God as a crutch to help us through a difficult time—we expect a quick emotional fix to problems that we’ve spent our lives developing.

There are those who think that one hour on Sunday morning is what living the Christian life is all about—there are others who have heads full of Bible knowledge, but somehow those principles are never allowed to affect their lives.

It is far too easy for us to treat God as a Sugar Daddy in the sky who we call upon when life turns up the heat. That mindset is a trap in which we refuse to understand that grace isn’t cheap—grace is costly and it is all about growth, transformation, and change. We are to grow, and things that grow, change!

Life cannot be lived without change. Discipleship has no meaning if we’re not continually engaged in incremental transformation.

In our fallen state, there is much we do not comprehend—much we must persevere forward on in faith. While resisting the madness of Nazism, Dietrich Bonhoeffer had to nurture and maintain faith in the sovereignty of God as tremendous trials closed in all around him.

What about us? What are we to do with the pain and discouragements that comes with life? Should we get mad at God and everyone else? Gripe, grumble, complain, and be miserable—make everyone else miserable because misery does love company, doesn’t it?

Actually we ought to recognize troubles as an instrument that God can use for our spiritual enrichment—to compel us to depend more fully on him. Pain or heartaches quite often forces us to acknowledge our fragility and our desperate need for God. Oft-times we don’t get to that point of enlightenment quickly because our free will is intact—we choose how we respond to weakness, insults, persecutions, trials, and pain. It’s not automatic for the hard stuff of life to drive us closer to God, but having nowhere else to go, it’s truly the only wise choice.

As we put wisdom into action and draw near to God we begin to think the thoughts God wants us to think and we begin to change, transform, and marvel at God’s grace. Consider Paul’s perspective-altering insights written to the messed-up collection of Christ-followers at Corinth.

To keep me from becoming conceited because of these surpassingly great revelations, there was given me a thorn in my flesh, a messenger of Satan, to torment me. Three times I pleaded with the Lord to take it away from me. But he said to me, “My grace is sufficient for you, for my power is made perfect in weakness.” Therefore I will boast all the more gladly about my weaknesses, so that Christ’s power may rest on me. That is why, for Christ’s sake, I delight in weaknesses, in insults, in hardships, in persecutions, in difficulties. For when I am weak, then I am strong.

That passage was written by Paul, a man who had much experience with bitter adversity. He had been whipped, beaten, stoned, shipwrecked, hungry, thirsty, cold, naked, and constantly in danger. There is much speculation as to what tormented Paul—what was the thorn in his flesh? Was it incessant temptation or ruthless foes? Was he referring to chronic maladies such as cataracts, malaria, epilepsy, or migraine headaches?

We simply don’t know. What we do know is that Paul reached the point where he comprehended that divine power was best displayed in human weakness—God’s grace would sustain him and be made perfect in his affliction and weakness. 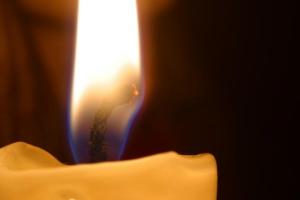 grace transformed him. He came to grasp a paradox: When he was weak, then Christ by his wondrous strength could make Paul spiritually strong. Physical or emotional weakness is an opportunity for spiritual strength and growth. It’s an open invitation for us to trust God and his awesome grace; a challenge to us to put our faith into action. We get to decide to put up or shut up about our faith—do we trust God or not? God’s grace is a free gift that costs our personal surrender. It’s not cheap and it’s not easy. Personal surrender does not happen all at once—it is a process of trusting God minute by minute and day by day through the good and bad times.

Faith is forged in the hard places of our lives as we put misfortunes in the context of God’s purposes. No situation or circumstance should ever slow us from investing our lives probing God’s grace. We do so—we learn the extravagance of grace—as we claim, affirm, and endeavor to live out the promises of God.

Like Loading...
Posted From Behind Prison Walls
The Search for Piety and Obedience
Friar Tuck's Word of the Day