Homesick For Heaven
“When I go don’t cry for me, in my Father’s arms I’ll be. The wounds this world left on my soul will all be healed and I’ll be whole. Sun and moon will be replaced with the light of Jesus’ face and I will not be ashamed for my Savior knows my name. It don’t matter where you bury me. I’ll be home and I’ll be free. It don’t matter where I lay, all my tears be washed away.” ~Julie Miller~

It was a late Wednesday afternoon in early February when the song All My Tears seized my attention and set my imagination loose. Sitting alone at the back of the sanctuary, I was minding my own business absently reading over some notes. The only lights on were those bathing the stage, where the worship band was working up new material. Low-grade winter sunshine streamed through the tall west windows to give the large open room a tint of gray and shades of loneliness.

The shadows were welcome friends conducive to my introspective mood. Due to an inordinate number of violent deaths of family members that occurred in one February or another, the month has a tendency to put me in a speculative frame of mind. That day there were many fragments rattling around my brain—pale ghosts dragging chains of memory and nearly forgotten heartaches creeping out of inner crypts. I was vaguely listening to the band members banter about key and instrumentation specifics for their next effort, but the dialog was entirely wasted on me because it was in that foreign dialect I refer to as music-ese.

My head was bent low when some nifty finger picking caused me to tune in a bit. The opening lyrics came in a blast of straightforward sincerity, delivered by a female vocalist with one of those distinctive alto voices that never fails to stir an emotional response and make my ears perk up. I hung on every word, and then, whether intentional or not, her voice broke in an old familiar way when she sang a line that struck me with a visceral force: “It don’t matter where you bury me I’ll be home and I’ll be free . . .”

In knee-jerk fashion my head came up and my shoulders stiffened. I closed my eyes to slip inside and be carried away by the imagery. A bluesy harmonica riff weaved its way through the contours of the tune and repeatedly found its sweet spot—each time it wailed loudly a tingle swept down my spine. When the final notes drifted into silence, my expression must have been easy to read. The group’s leader and guitar player, a man who happened to be named Ken, was grinning at me. “I thought you’d like that one.”

“Like it? It should be my theme song,” I replied enthusiastically. It’s an absurd even trivial cliché but All My Tears made me feel homesick for heaven. The band ran it twice more before they were satisfied. Stillness settled in the deep recesses of my soul as each rhyme persuaded me to enjoy the trail through the tears to that faraway place of peace.

That night the Internet came in handy for some quick research. I learned that All My Tears was written by a Texas born singer-songwriter named Julie Miller. It was included on her 1993 album Orphans and Angels as a duet with Emmylou Harris—that piece of info blew me away.

In the lexicon of my musical preferences Emmylou Harris is the female voice by which all others are measured. She’s the crème de la crème, the gold standard. The beauty of her evocative phrasings has dismantled me on more occasions than can be rapidly recalled. When my time of dying comes, the first strains of the angelic hymn I hear will be a soloist with Emmylou’s crystalline pipes.

She has an eclectic body of work that encompasses and exemplifies what I refer to as roots music. As I sat staring at the computer screen I wondered how I’d missed this profound song. We were halfway through the first decade of the 21st century and it’d been around since 1993, yet I was just now gleaning its gems—how was that possible?

I found several different versions and gave each one a fair hearing. The melody haunted all the crevices of my interior landscape, and released a flood of remembrance and grieving. It washed me clean—I honestly appreciated where the currents took me. In my life and times sorrow had burned its brand on me, leaving its signature in the lines of my face and the cast of my disposition.

At some juncture of my journey I’d come to terms with the harsh realities of a broken world where death is alive and well in our midst—this side of eternity the grim reaper holds court to taunt and terrorize.

To accept and ofttimes embrace the sadness that is part and parcel of life had become and remains my modus operandi—that method of functioning can discombobulate those schooled in a theology more attuned to the precepts and motivations of the American dream. The illusions of Happy Face Christianity may generate millions of dollars, but when the hardness of death comes knocking—and come knocking it must—the insulation offered by material success evaporates into nothingness.

My perspective—tempered by many close encounters with caskets holding loved ones—is rooted in the quandary of the human dilemma as explored in the ancient wisdom literature of the Hebrews. It’s an outlook of stark realism, which is frequently misinterpreted, misunderstood and misrepresented. There was one particular woman who stated flat-out that I was not normal, and got all huffy about making her point. I regarded her with a mix of surprise and pity, attempting to figure out how she’d managed to crawl inside my skin to so fully comprehend my experiences.

A spasm of cynicism gripped me and, reverend or no reverend, the judgment of Dylan’s Positively 4th Street comeback bent through my brain: “Yes, I wish that for just one time you could stand inside my shoes. You’d know what a drag it is to see you . . .” In a confession worthy of someone bucking for sainthood, at that moment I didn’t care whether she noticed my smirk or heard the barely contained snicker.

Mourning & Comfort
“Gold and silver blind the eye, temporary riches lie. Come and eat from heaven’s store, come and drink and thirst no more. So weep not for me my friend when my time below does end. For my life belongs to him who will raise the dead again. It don’t matter where you bury me. I’ll be home and I’ll be free. It don’t matter where I lay, all my tears be washed away.” ~Julie Miller~ 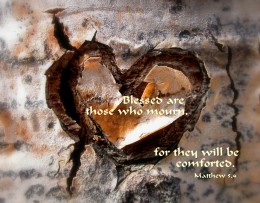 Contrary to the hopelessly unreal expectations of those who practice Happy Face Christianity, to mourn is entirely natural and healthy. In fact, unless the man named Jesus was a flaming liar, to mourn means to participate in a blessing. His most famously quoted sermon contains the promise: “Blessed are those who mourn for they will be comforted.”

Down through the ages there’s been some distress applied to that forthright statement—it’s been spiritualized beyond recognition. In a variety of church circles a convoluted reasoning attempts an interpretation that misses the mark completely. Preachers have tortured the text searching for some hidden meaning, but in doing so the power of Christ’s words are diminished. The surface simplicity of it carries a significance that is transformational—the passage requires a lifetime of discovery to probe its depths and revel in its joys.

Call me crazy—others most assuredly have—BUT comfort is sweet. To be comforted is a fine state to be in—we live in a place of troubles where the laments of anguish are truly a dime a dozen, so why not take advantage of all possible comfort?

I choose to mourn on a routine basis; to integrate it into who I am by wrapping everyday sorrows around me, because in the grieving the blessings of supernatural comfort become more and more precious. The scars this world inflicts on each of us have the potential to derail and destroy—heartbreaking loss, relational fissures, financial stress, plus those seasons when circumstances chisel away at self-esteem until we’re crushed by the persona non grata blues. The wounds can be gashes that overwhelm, but there is solace, healing and blessing available when we embrace the mysterious wonder of the beatitude: “Blessed are those who mourn for they will be comforted.”

The Creator of the universe looked upon our helplessness and put everlasting love into action. In the person of Jesus of Nazareth, God obtained firsthand knowledge of the endless affliction that poisons and permeates the atmosphere on the rock known as planet earth.

Jesus lived and died here, suffering all the slings and arrows of outrageous fortune that caused Shakespeare’s legendary Hamlet to contemplate suicide—the slings and arrows that are the stuff of life for each of us. Death came knocking for Jesus at a site so desolate it was called The Place of the Skull. The Son of Man endured an excruciating end, bleeding out suspended above knots of spectators, and for a brief wink of time the grim reaper danced in delight, victorious once more.

However, on the third morning Jesus of Nazareth burst forth from the tomb and in doing so, gave the grim reaper a lethal kick in the crotch—a blow from which death has never recovered. Consider the triumphant jubilation proclaimed by Paul of Tarsus: “Death has been swallowed up in victory. Where, O death, is your victory? Where O death, is your sting.” It don’t matter where you bury me I’ll be home and I’ll be free. Life has its pains and torments, and then we die, but death does not reign supreme. We persevere forward through the scrapes and misfortunes enlightened and empowered by the knowledge that death is not the end. We have a home of indescribable tranquility awaiting on the other side of the door, a mansion prepared for us by our Lord and Savior Jesus Christ.

In all actuality, the authentic certainty of the resurrection is the ONLY hope we have against the unfair vagaries of life which have no mercy or conscience. One day all past and present sorrows will be meaningless, and it won’t matter where I lay, all my tears be washed away.

AMEN—So Say We All.