“What has been will be again, what has been done will be done again; there is nothing new under the sun.” ~Solomon~

King Solomon’s words are timeless and enduring, but our arrogance attempts to deny them. Nevertheless, there really “is nothing new under the sun. What has been will be again, what has been done will be done again.” The human heart, with its intrigues and motivations, remains unchanged.

In the 21st century, we think we’re enlightened, but in reality, we continue to travel along with blinders firmly in place. We have a remarkable capacity to ignore truth.

“The Word of God is like a lion. You don’t have to defend a lion. All you have to do is let the lion loose, and the lion will defend itself.” ~Charles Spurgeon~

Pundits mock the Bible and take perverse satisfaction in making blanket statements of condemnation that pigeonholes those who acknowledge it to be God’s Word. Yet when assaulted by an endless chain of ethical lapses and widespread corruption, those same commentators wring their hands and ask aloud why our culture seems trapped in a downward spiral of societal chaos.

The reasons for our certain descent into a quagmire of shifting sand standards are profoundly self-evident. Like the wicked witch in The Wizard of Oz, morality is melting right in front of our eyes as we drift farther and farther away from the authority of God’s Word. The Bible is not a symbol of anything; it is an infinite book imparted by an infinite God. Given that fact, it cannot be completely comprehended by finite minds constricted to time and space. Within its pages, we uncover the heart and soul of the human race, and also have the opportunity to explore the complexities and intricacies of God. 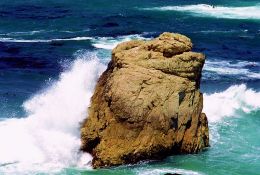 We are, however, awash in a sea of relativism because we have disregarded the rock of living truth. The Bible remains solidly entrenched, but we have flowed with the current for so long that we are in serious danger of drowning in its murky wake. Bits of truth have been blended in with a mixture of human-centric good intentions and outright falsehoods to formulate an elixir that has deadly ramifications. Intoxicated by it, we hear only what soothes our ears and go deaf when disturbing words are raised.

The mainstream has marginalized the Bible and has actively trampled it under foot, but it remains untarnished. Supposedly enlightened minds relegate it to some dusty back shelf of antiquity, even though its precepts and principles have been codified in the framework of our civilization. Yet we now live in a world where boundaries are nonexistent—and where there are no restrictions, people cast off all restraints. We no longer discern the pitfalls of reducing whole sections of God’s Word to conform to the politically-correct mandates of activists who adhere to the commandments of postmodernism.

“What has been will be again, what has been done will be done again.” In the Garden of Eden, God’s Word was questioned to the point of direct disobedience. All through history we have repeatedly followed that precise pattern. We experience the blessings of God, but reject his standards; we revel in the beauty of God, but dismiss his requirements; we hear of the wonder of God, but disregard his call on our lives.

Regardless of the stained-glass portrayals of Christendom, perfect people living perfect lives do not populate the Bible. Jesus of Nazareth is the only one who ever achieved a life without sin. Other than him, from cover to cover God’s Word narrates and examines real people who struggled through the pain, loneliness and alienation of the human dilemma.

In an honest reading, we discover that Bible characters do not have their spiritual dimension all figured out. Life lived in relationship with God is not nicely wrapped up in a box of religious liturgy with neat and tidy answers to hardships, disappointments and bitterness. We witness those who rant, rave and bargain with God over the injustices and inequities of life; we find complainers, whiners and grumblers engaged in heated debate and intimate dialog with the supernatural Being who created the universe.

Existential questioning and philosophizing is found side by side with proclamations of significance and meaning. In the real world of the Bible, faith and doubt are involved in an ongoing knockdown drag-out fight. We learn that our Creator is in no way threatened by sincere disagreement, but hypocritical submission to religiosity is abhorrent to him.

Despite our attempts to clean up its messy and disorderly profile of life, the Bible does not sanitize the human experience. As I read it and allow my imagination to create pictures and scenes, then a great deal of God’s Word is far too violent and much too graphic to receive the self-sanctifying “Christian” label.

Secular fundamentalists have chipped away at truth for years, but God’s Word endures as an anchor for our lives. According to the writer of Hebrews, it is “living and active. Sharper than any double-edged sword, it penetrates even to dividing soul and spirit, joint and marrow; it judges the thoughts and attitudes of the heart.”

Did God really say? Yes, as a matter of fact, in times past he spoke and most definitely continues to speak in the pages of an extraordinary book.