My maternal grandparents were Percy and Geraldine Major. They were charter members of the Port Colborne BIC Church. They had a significant impact on my life and perspective; most of my theology comes from the example of their lives.

I spent a large chunk of the summer of 1963 with my grandparents at Camp Kahquah, a sprawling campus of breathtaking solitude situated on a gentle hillside along Ahmic Lake near Magnetewan in northern Ontario. One had to be eight years old to be a camper, and since I did not turn that magic age until October, I simply tagged along with them.

They were there as servants of the church, which I suppose did not mean much to me then, but looking back at their example, I am always challenged. Grandma was the cook, while Grandpa, being a handyman took charge of the caretaker responsibilities. The campground was a place of endless adventure for a boy with a streak of curiosity. There were well laid out trails to follow, archery skills to be acquired, wood to chop, horses to ride and enough opportunities for mischief to keep me and my imagination busy.

One early in the season restriction sticks in my mind: In the roped off swimming area at the beach I wasn’t allowed beyond the blue buoys because I hadn’t demonstrated the necessary ability yet. By the end of the summer I passed the swimming test and was entirely pleased with my achievement.

In this natural landscape shared with hundreds of chipmunks and other wildlife, I learned an important life-lesson that became foundational to my comprehension of who God is and who I am. Much of my outlook of the world around me has its roots in an incident that occurred late one afternoon in a place surrounded by towering evergreens.

Grandpa and I were fishing off the end of the dock, which in those days was quite rewarding. The fish always seemed to be biting, and we’d catch our fill of perch and bass in no time at all. The sky was gray streaks gathering together in big swirls, and there was a queer kind of color shaping up behind the clouds. I knew that because 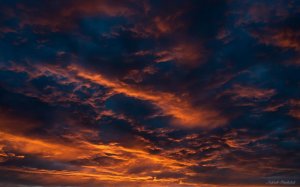 “That’s a queer kind of color, ain’t it.” He made that habitual little click-click sound with his mouth, while staring skyward. I followed his eyes and focused on it for a few minutes, amazed that the colors were constantly changing, which struck me as being pretty neat. Grandpa kept watching it, his eyes darting across the horizon every minute or so. The air started moving in off the lake. It felt like a warm and lazy breeze, but my grandfather stopped what he was doing, knelt down and closed up the tackle box.

“We’d better pack up, Kenny,” he said, something funny in his voice.

I frowned, jiggling my line. All of a sudden, the wind whipped up into a big whooshing gust, which caused the temperature to drop perceptibly. It came about so quickly that the nape of my neck prickled, and I scrunched up my shoulders as I hurried with my reel.

Grandpa was all business as he grabbed up our gear. The gray-streaked sky with its queer colors blackened almost instantaneously. Flashes of lightning danced and crackled, and the lake began churning as though there was fire beneath it causing it to come to a boil. It had happened so fast. One moment the surface of the lake was as calm as calm could be, rippled only by our bobbers. We had been joking around and teasing each other about whose fish was the biggest one caught.

Then in the time it took a seven-year-old to reel in his line, we were racing away from cross currents of waves splashing over the dock. Grandpa was hustling me along when a

bolt of lightning slashed from the sky accompanied by a clap of deafening thunder. It must have struck the ground near us or the water just behind us because it was bone-jarring and in a split second there was an intense burnt odor in the air.

I jumped. Well, that is likely a grand understatement. What really happened was that I almost came out of my skin. A petrified scream ripped itself from my throat and I couldn’t breathe. When my feet came down they were running, and they weren’t going to stop until safety from the storm was found. I’d dropped my pole and whatever else I had in my hands and was half-way up the hill before I realized it. 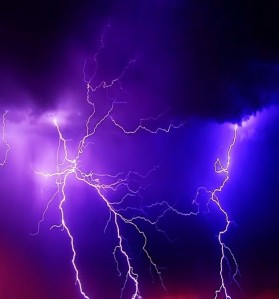 Another crash of lighting and thunder struck seemingly just as close as the earlier one. My legs were pumping faster and faster. I stumbled without ever slowing. On the outside edge of control, I dashed into the cabin, almost knocking Grandma down as I scrambled to my room, where I cowered in a corner. In later years I’d refer to that thunderstorm as apocalyptic. Just then, I was about to tap into a rich vein of homespun wisdom. Grandma came and picked me up. I was crying and she hushed me, telling me not to worry. She carried me out onto the porch. I squirmed and protested but she insisted. She sat on the hanging swing, and I snuggled in beside her under the protection of her enfolded arms. It was pouring rain now. The wind was blowing hard, and every few minutes a jagged flash of lightning was followed by a roll of thunder. In fact to my ears, the rumbling was nonstop.

“There’s nothing to be afraid of, Kenny.”

I whimpered something unintelligible, pressing in closer to her.

“It’s nothing but a little storm,” she said, rocking gently back and forth. “God is in complete control. He’s showing us who’s in charge of the world. And believe you me, this thunderstorm is just a tiny display of his power.” She held her thumb and forefinger up to indicate a fraction of an inch. “This is God’s creation. He’s far more powerful than all the thunder and lightning in the whole world.”

Then she spontaneously broke into song: “This is my Father’s world, O let me ne’er forget that though the wrong seems oft so strong, God is the Ruler yet . . .”  Grandpa came along and joined in, their voices blending in harmony until the last words trailed off.

“That’s fine singing,” Grandpa remarked, smiling down at me as he patted my back. “Kenny, we almost got cooked out there, didn’t we?”

“Percy, don’t scare the lad,” Grandma said, a mild rebuke in her voice.

I piped up: “I’m not scared anymore, Grandma.” And I wasn’t. The fear had dissipated, gone to wherever it is that fear goes when it runs away to hide. It was a settled matter for me. The omnipotence and sovereignty of God to a little boy was a profoundly simple fact: God was in charge of the world and he was mightier than all the thunder and lightning I could ever imagine. The three of us sat on the porch watching the clouds sweep overhead as the storm huffed and puffed itself out. I have had an abiding appreciation for thunderstorms ever since.

Like Loading...
Posted From Behind Prison Walls
The Search for Piety and Obedience
Friar Tuck's Word of the Day