Once upon a time, driving home from church, a little boy remarked, “The preacher said that God is so big he could hold the whole world in his hand. Is that true?”

“But Mommy, he also said that God comes to live inside of us when we believe in Jesus as our Savior. Is that true too?” the boy asked.

Again the mother assured him that what the minister had said was true. With a puzzled look, the child asked, “If God is bigger than us and he lives in us, wouldn’t he shine through us?”

Is that too simplistic for our sophisticated enlightenment? Maybe it is, but just as sure, maybe it’s not. Perhaps in this illustration we see another reason why Jesus urged us to become like children to comprehend kingdom matters.

Facts are facts: God is bigger than us. Though mysterious—mystical, even—he does live in us when we accept Christ as Savior. If he doesn’t shine through us, we are the problem, not God. The buck stops with us, not God.

John, James, and Peter were the closest confidants of Jesus. John and James were brothers referred to as the Sons of Thunder, and Peter was also known as Simon.

James was the first of this inner circle to be martyred. King Herod Agrippa had him executed with a sword. As far as is known, James left no written record. No letter or theological treatise bears his signature. Peter was the eyewitness source for the account we know as Mark’s gospel. He also penned two powerful letters from Rome.

It was during Nero’s pogrom against Christianity that Peter met his death. Tradition holds that he was crucified upside down, but actual evidence is thin, which suggests this is an embellishment of some words of Jesus recorded by John.

Of the three, John was the most prolific writer. He chronicled the life and times of Jesus Christ, three letters fleshing out the life-altering meaning of love, and also, the mind-numbing Revelation of Jesus Christ. It is believed that John escaped martyrdom, and died of natural causes near the end of the first century.

In his detailed gospel, John presents a play by play encounter that is singularly significant. What follows is my paraphrasing and shaping of that story.

It was about noontime. Jesus was going from Judea to Galilee. Much of the Mideast was desert climate, which meant it was probably incredibly hot.

The most direct route to Galilee was through the region of Samaria. Jesus and his disciples could have easily skirted the border of Samaria, avoiding the country completely, which would’ve been the inclination of a good Jew of that era.

When they approached the town of Sychar, they had been walking in the heat for a long while. The disciples went on ahead to purchase food, but Jesus, tired from traveling, sat down by the well to rest. A Samaritan woman arrived to draw water. Jesus asked her for a drink, which was a shock to this unnamed woman. Jews did not have any dealings or even associate with Samaritans. When it came to religious and social issues, the Jews and Samaritans were enemies, and had been for four hundred years.

The problem with Samaria was the people who lived there. It was populated with Samaritans. They were not pure Jews by heredity for they had been ethnically mixed over generations of inter-marriages with the Arab race.

Samaritans were not even faithfully practicing the Hebrew religion. They were blending in vestiges of their earlier pagan religions, which sounds like the pluralistic new age society we live in. Christians often endeavor to isolate or insulate themselves from it. Some church-going folks are inclined to avoid certain places and certain people because they’re not our kind. When we do so, we make a critical mistake because Jesus crossed all barriers to share the good news with everyone. Those who claim to follow him must do no less. Jesus set a standard that is supposed to be the guideline for our behavior.

Imagine this scenario in present-day terms: A prominent Israeli rabbi strolls through a Palestinian neighborhood. He stops for a rest and strikes up a conversation with a Palestinian woman of ill-repute.

This is exactly what is happening here in the exchange between Jesus and the Samaritan woman. It’s thoroughly uncompromising, but we must grasp that Jesus of Nazareth was revolutionary because God’s love is radical.

“Saving knowledge is diffused over the earth, not like sunlight but like torchlight, which is passed from hand to hand.” ~James Strachan~

God’s love is unconditional, reaching the depths of human depravity. Grace is for everyone, so Jesus took risks to meet people on their turf, at their point of need.

This woman felt unworthy and she wasn’t even sure that talking to Jesus was legal. Much of their conversation was likely spent with her glancing over her shoulder in anticipation of condemnation from some quarter.

She was accustomed to being sneered at, talked about, looked down upon, and cast out because she had a terrible reputation. It was so bad that she came to the well at the noon hour to avoid the fine, upstanding women of Sychar.

Certainly she’d made some poor choices along the way, but society had not been kind to her. She’d had five husbands and was presently living with a man, which has prompted some scholars to suggest that she was the promiscuous town harlot.

Reconsider that idea: In those days of a dominant Patriarchal society, women had no rights. It was the husband who had the power to get the divorce, so one way or another, this woman had been discarded five times.

She was an outcast. Most people would have ignored her or turned away from her for fear of guilt by association. Not Jesus; he reached out to her. She was astonished by his request for a drink, and exclaimed, “You are a Jew and I’m a Samaritan, and you want to associate with me? Is this legal? Don’t you know who I am?”

Think for a moment about that person or group of people we’ve snubbed or ignored for fear of guilt by association. Tell me, where did we ever get the idea that we were better than anyone? It’d be from religion, not from relationship; from religion, not from God’s Word. God’s Word tells me that the only difference between me and the vilest offender is grace—God’s grace is living water that is transformational.

Jesus Is Our Example

“You are the light of the world. A city on a hill cannot be hidden. Neither do people light a lamp and put it under a bowl. Instead they put it on its stand, and it gives light to everyone in the house. In the same way, let your light shine before men, that they may see your good deeds and praise your Father in heaven.” ~Jesus of Nazareth~

Jesus reached out to this woman; he took the initiative and engaged her in dialog.

Jesus shattered barricades and destroyed accepted cultural norms. Not only did he share water with her, but conversation, and in that communication, he revealed who he was, and how he could provide the living water of forgiveness and new life.

The result was the woman became Christ’s ambassador to Sychar. Scripture tells us that “many of the Samaritans from that town believed in him because of the woman’s testimony.” The writer John, that Son of Thunder, also gave us this tidbit to mull over: “So when the Samaritans came to him, they urged him to stay with them, and he stayed two days. And because of his words many more became believers. They said to the woman, “We no longer believe just because of what you said; now we have heard for ourselves, and we know that this man really is the Savior of the world.””

We who follow Christ are supposed to mimic Jesus of Nazareth’s example—do we? Do we share grace or do we hoard it? Do we build relationships with those outside our circle? Do we meet people on their terrain or expect them to come to us?

Here’s the deal: Our society is post-Christian. We must communicate the good news of Christ in the language of the culture and in its territory. Doing so will put us into conflict with some tenderhearted and well-meaning church-going individuals. It’s the tightrope on which I’ve spent the bulk of my ministry life.

Speaking to his disciples, Jesus said, “You are the light of the world.” 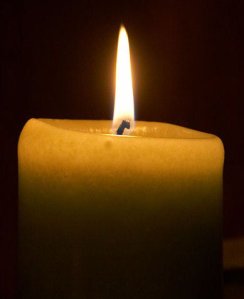 What was true of those first-century disciples is true for modern-day ones. Please note that Jesus did not say that we were to be light—he said we are light. In fact, not to put too fine a point on it, but according to Jesus, we are the light of the world.

The light of the world; light can best be seen in darkness. A single candle can shine brightly in midnight’s darkest gloom. Put the same candle in a brightly-lit room at high noon along with a hundred other candles and no one will be able to recognize its light. What’s up with the light of the world is this: The darkness is not in the holy huddles of our Christian gatherings. The darkness that permeates our world is entrenched in our backyards, workplaces, classrooms, bowling alleys, and taverns. It is in those places where we must shine, individually and collectively.

As Jesus purposefully made his way into the forbidden Samaria, we are to meet hurting people on their home field. There are those who’ve been disposed of and left alone, and we are to take the initiative to engage them in conversation.

We are the light of the world, so we must be intentional about building relationships that make a difference for eternity. After all, if God is bigger than us and he lives in us, wouldn’t he shine through us?